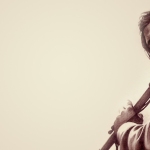 Kung Fu follows the adventures of a Shaolin monk, Kwai Chang Caine (played by David Carradine) who travels through the American Old West armed only with his spiritual training and his skill in martial arts, as he seeks his half-brother, Danny Caine. Kwai Chang Caine is the orphaned son of an American man, Thomas Henry Caine, and a Chinese woman in mid-19th century China. After his maternal grandfather’s death he is accepted for training at a Shaolin Monastery, where he grows up to become a Shaolin priest and martial arts expert. Flashbacks are often used to recall specific lessons from Caine’s childhood training in the monastery from his teachers, the blind Master Po and Master Kan.

I used to watch this show when I was a kid and inspired me a lot 😉 Following are some quotes extracted from Season 1 of the show.
END_OF_DOCUMENT_TOKEN_TO_BE_REPLACED

Hello there everybody. Welcome to my blog. What I write here are things I'm interested in, things I do and things happen to me. Hope you'll enjoy reading the posts. Thanks and have a nice time :)